Last week, Akira and I played a trick on the class that I have to share:  partly because we think we’re really funny; partly because it highlights something wonderful about our school; and, partly because it may help some of you at home to understand why we went on a field trip to see the boiler. 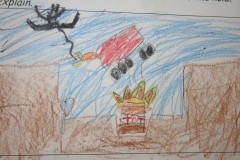 We were reading a book called Mike Mulligan and His Steam Shovel, by Virginia Lee Burton, a follow up to another book by her called The Little House.  (You can see three boys enjoying this one in the Gallery–who says boys don’t like to read fiction?)  These are wonderful old stories, and fit nicely with our exploration of community and how communities grow and change.

We had got to the point where Mike and Mary Anne (the steam shovel) had completed their amazing hole for the basement of the new town hall. 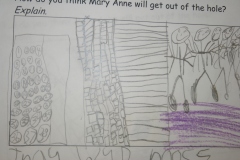 The students had written and drawn some excellent ideas for how they might solve the problem of getting out.  It was now time to find out what idea the author had come up with, through the character of the little boy, whose insights twice save the day.

Why Akira and I think we’re really funny is that Akira arrived at school with a copy of this book translated into Japanese with which he was very familiar.  So, I—with our digital projector that I’d been using so that we could all read the book together—said to the class, “Okay, let’s see what the little boy suggests,” and opened to the Japanese page.  Jaws dropped in surprise, then some children recalled that Akira had said he knew the book in Japanese and correctly surmised this was what they were seeing.  Then… I ran my finger along the Japanese text and read the corresponding English words which were quietly sitting just out of camera view.  Exclamations of “Mr. Caldwell can read Japanese!!” ensued.

Something wonderful about our school is the opportunity to learn from the many children who speak other languages than English.  In our class we have speakers of Arabic, Hindi, French, Mandarin, Spanish, Greek, maybe a little Cree, and Japanese!  I am often struck by how readily these new language learners embrace the structured word inquiry we do.  They are motivated (and reassured, I think) to discover the logic and order of a language so different from their own.  And, they often have things to teach us about our own language.  Our resident Greek speaker, Orestis, has helped us to understand the spelling of several Greek-rooted English words, such as <school> or <alphabet>.    Lately, a number of our students have shared something of their language and country of origin on the daily announcements, which the rest of the class has loved. 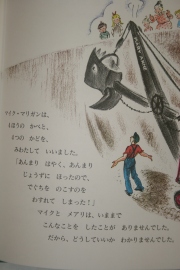 After our joke, Akira got up and actually read the Japanese, which was wonderful to hear.  We could see that, like English, the Japanese words are separated by spaces on the page, and that the characters represent phonemes:  we were able to identify the symbol for /m/ by noting which word represented “Mike”.

And so, the reason we went on a field trip to the boiler in the school’s basement is…wait!.  Maybe I shouldn’t tell you, for fear of spoiling the ending of the story for some.  Ask your child.  I’m returning my copy to the library this Friday–go and get it!  Suffice it to say that the children were delighted and fascinated to see that our school is heated with the same technology that drove Mary Anne (in 1939, when the book was written), and that allowed the little boy to save the day.

Spring has really sprung (though King Winter seems to be raging again today).  I’ve been terribly slow to get a new post up, both because there has been a lot going on that has kept me from sitting down to write, and because there has been so much going on that I wasn’t sure what to write.  Now I have a bunch of stuff I want to share!  Here’s a start… 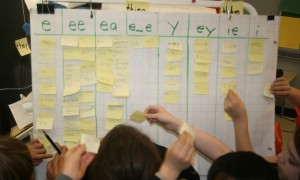 Here is a picture from a recent activity, reflective of the process of making collections in our word study.  I’ve referred to this process before, but lately I’ve been reflecting upon the practice:  what it does for us as a learning tool; whether it is equally effective for everyone (hardly anything is); and whether I am overly reliant upon this approach.  (In other words, maybe I need some other ideas).  This is investigative learning, and as such open-ended:  though as the teacher I may have a particular learning goal in mind, the route we take and the learning that occurs can often have surprises.  I like to think we are engaging in word science–while learning how to learn in a broader sense also.

Gather the Data:  In the last couple of weeks, I’ve been feeling the need to assess and perhaps reinforce our understanding of some of the phonology we’ve explored this year.  We have covered a lot–including the many graphemes that can represent the vowel phonemes.  But assessment suggested that we needed to solidify our grasp of the “long <e>” phoneme.  So, I asked the students to collect words that had this phoneme.  (I try to let these “collecting” periods simmer for some time, as I generally don’t want the act of collecting to completely take over the central point of reading:  that is, comprehension.  Also, it gives everyone a chance to participate in their own time and capacity.  In this case, though, we had an intense period of collecting from books the children had already read that day or week).

Sort the Data:  Next day, we sorted our words, creating categories according to what graphemes seemed to represent the “long <e>”.  Several surprises:  <ey>, <ie> and <i> were all discovered, though some questions exist.  New categories had to be created

Analyze the Data:  An open question to the students:  what can we observe about our chart (which now also had the appearance of a graph)?   Here is some of what they shared:

What does this process do for us?  I think it makes the children more attentive to the structures of the words.  I have to believe that this kind of focus will ultimately help them learn these words.  Also, they seem to appreciate the ownership they have over this process:  all of these words are their words; not just some list I handed them.  This process of analysis will hopefully reinforce as well as reveal concepts that will support their reading and their writing:  when attempting to write a word—<dream> or <monkey> for instance—they are now able to consider which grapheme is most likely in that particular position in the word.  Such a process does seem to afford children an opportunity to be engaged at a variety of levels:  for some, this was an opportunity to be re-introduced to some basic graphemes and words;  others were able to stretch into new areas of inquiry.  And what I really like is that these investigations generate new investigations!

The teacher challenge with activities such as this is to ensure that I can assess individual as well as group understanding.  Thus, follow-up is required.

Current collections on the go:

Many years ago, I had a spring job at an outdoor education centre for which I considered myself wholly unqualified.  I couldn’t reliably name a bird or a tree.  My friend (who got me the job) helped me to see that our main purpose was to open the children’s eyes:  help them to see, and to wonder.   She was right, and lots of delightful, shared learning followed.  I think this is still what I am trying to do.

Finally, there are a couple of  links below to other class blogs of teachers and classes whose work I admire.  A recent post (and all her others, actually) by Ann Whiting about her Grade 7 class in Kuala Lumpur provides an “inspiring” glimpse of where an attentiveness to the science of words can lead!

Reading Can Be Taught

investigation and cogitation from the first grade nation

The latest news on WordPress.com and the WordPress community.